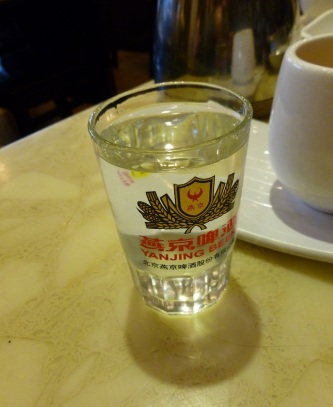 I met Isaac Stone Fish several years ago at a bookshop in Beijing. We had a brief but friendly conversation and I have since followed his journalistic career with enthusiasm. When he reached out to me a couple months ago, upon the publication of Baijiu: The Essential Guide to Chinese Spirits, I was delighted to accept his invitation to discuss Chinese liquor.

We met at a microbrewery in Washington, DC. He ordered a wine. I tried not to read anything into that at the time. We met again in Chinatown a month later, this time with a baijiu importer, where we tried a handful of uninspired baijiu cocktails at an even sadder restaurant called Wok and Roll. We discussed baijiu a bit, but mostly we shared old war stories about the Middle Kingdom, as veteran expats inevitably end up doing. The evening came to an abrupt but poetic end when I accidentally shattered a full bottle of baijiu and the smell left us no choice but to evacuate the building. In the cab ride afterward, I told Fish that if he really wanted to gain an appreciation for baijiu, we should meet again to sample a few of my favorite bottles.

Life intervened, I moved to another country (again) and I forgot to give him that tasting. But all in all, I remember the meetings as cordial. It was thus with a tinge of disappointment that I read Fish’s article for Foreign Policy, “A Million Chinese Can Be Wrong: China’s most popular spirit is coming to the U.S. Here’s why you shouldn’t drink it.” And I would be remiss not to mention the URL, which ended “baijiu_america_china_vomit_alcohol.”

The knives were out. Foreign Policy stormed into the baijiu debate like the deranged lovechild of Carrie Nation and Lord Palmerston. And FP, good sports that they are, gave me the chance to pen a response. The results, I think were a back and forth that neatly sums up the pro- and anti-baijiu positions.

Considering the way this blog started, I can’t help but find some slight amusement that I now find myself one of baijiu’s most vocal defenders. But life’s funny like that.

Find the full exchange below. Read and enjoy:

“A Million Chinese Can Be Wrong,” by Isaac Stone Fish

“In Defense of Baijiu” by me

This entry was posted in News and tagged Foreign Policy, Isaac Stone Fish. Bookmark the permalink.