I have devoted a number of posts to baijiu cocktails and the inherent challenges involved therein. Thus far all of my recipes have employed light-aroma baijiu as their bases for a straightforward reason: Light aroma is relatively mild and blends more easily with other flavors. Rice-aroma baijiu is similarly understated, and I can attest to its mixability. When visiting the tasting room of Vinn Distillery in Portland, I sampled a particularly outstanding rice-aroma Bloody Mary, and I don’t even really care for Bloody Marys (it tasted like Gates barbeque sauce, and there’s no faster way to a KC boy’s heart).

But what about southwestern pit baijius, like strong-aroma and sauce-aroma? Can it be done? Does the universe possess a countervailing force capable of offsetting the nostril-searing pungency?

As with most questions covered on this blog, I set about to find the answer in the form of a challenge. This time, I asked longtime-friend of my baijiu endeavors and Shanghai nightlife baijiu enabler Vance Yeang of Yuan Bar to have a crack at making some cocktails with strong-aroma Shui Jing Fang (who you will note is also the maker of last month’s featured baijiu). The results were surprising.

Vance came up with a range of cocktails to be served at my Shanghai book launch, but the one that most impressed me was a riff on the classic rum cocktail Dark and Stormy, appropriately rechristened Dark and Smoggy in its Chinese incarnation. Like all good baijiu cocktails, it tries not to mask the baijiu (not that anyone could) but accentuates and balances it with ginger. Vance was kind enough to share the recipe with 300 Shots readers. You will note that the rum-to-baijiu ratio is rather high, but believe me, a little strong-aroma baijiu goes a long way in the taste department. And what’s more, it’s a minor fire hazard.

So without further ado… 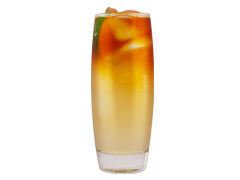 Fill two-thirds of a highball glass with ginger ale, set baijiu aflame and pour into glass. Shake the ginger syrup and rum, then add to glass. Add a squeeze of lime.