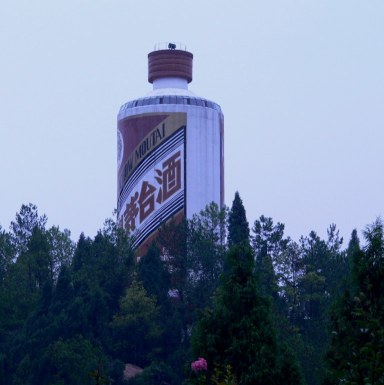 In the most places, you fake it ’til you make it. In China, you make it and then someone else fakes it. This has created all sorts of problems for aspirational baijiu drinkers like myself.

Take the case of Maotai, where there can be no doubt of its success. The favorite drink of Premier Zhou Enlai and the legendary boon of the Red Army, it was named China’s national beverage in the 1950s. All visiting dignitaries, most famously Richard Nixon, were served the sorghum brew. As China has discovered “to get rich is glorious,” so too has Maotai. When China opened its doors to international trade in the late 1970s, a bottle of Maotai sold for under a dollar. By 2000 the price of Maotai had increased to about $25, than to over $100 by 2010, and now it costs around $200.* According to the Wall Street Journal, the same Deng Xiaoping-era bottles that once cost under a dollar now sell as collector’s items at auction for an average of RMB30,000 ($4,750) a pop.

Maotai City – between a rock and a wet place.

There are several reasons for why Maotai’s prices have shot through the roof. With its glorious revolutionary history, Maotai has long been the baijiu of choice for government officials, who as a group spent an estimated RMB600 billion ($94.5 billion) on alcohol last year, or about as much as China claims to have spent on national defense. Maotai has also become a status symbol among wealthy Chinese businesspeople, eager to flaunt their newfound wealth. Normally a business faced with a similar surge in demand would ramp up production, but the city of Maotai is situated between a river and mountains – there’s little room to expand. Further complicating matters, a batch of Maotai is produced in a complex process that can requires about a year’s time. Even though the price keeps climbing, Maotai can’t currently produce enough to meet the demand.

So a sophisticated group of counterfeiters has moved in to fill the gap. According to a report published in late 2011, the production of fake Maotai was staggering last year. In Guizhou Province alone: 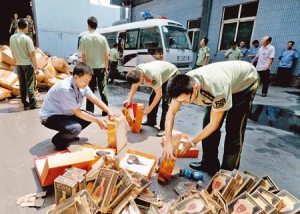 And those are just the ones they caught. Though most liquor companies in China are aggressively fighting piracy through increasingly complex packaging, the counterfeiters, too, are ratcheting up their game. Many go so far as to reuse the original bottles and, according to some sources, there is good incentive for baijiu vendors to become accomplices in the crime:

This all leaves baijiu consumers in a bind. If you want to play with Maotai, you might get burned to the tune of $200. You’ll recall that the last time I danced with Maotai, the bottle I purchased was acquired for the suspiciously low price of RMB160 ($25) – almost certainly a fake. So what’s a drinker to do? According to Liu Jianfeng, senior manager of Googut, the Beijing-based auction house interviewed by the Wall Street Journal:

[…]the way to spot a fake is by shaking up the bottle and shining a light through its translucent walls. If there are a lot of bubbles that’s a good sign, but no bubbles at all means it’s a fake.

Interesting, though hardly practical. You see, the standard bottle of Maotai actually comes in an opaque bottle. More to the point, who goes liquor shopping with a flashlight and collapsible dark room?

This is where my lovely wife comes in. Braver than I, she hit the streets of Guiyang, did a great deal of comparison Maotai shopping and interrogating liquor sellers, and brought back a bottle of what we can be reasonably certain was the real McCoy.** Let no man say I did not marry without good cause.

Last weekend we met a couple of friends at a Guizhou-style restaurant to do the bottle justice … but that’s a story for later this week. Stay tuned.

*Incidentally, those of you reading this in the US may have access to the genuine product at cheaper prices – a source of resentment for many Chinese baijiu lovers.

**Fun fact: The term “the real McCoy” is related to a similar counterfeit problem in America during its disastrous experiment with alcohol prohibition (1920-1933). Much of the alcohol that found its way to American drinkers was homemade or chemically treated industrial alcohol. Bootleggers added a dash of flavoring and color, and sold it as vodka, whisky or whatever – often using fake or recycled brand name bottles. But not world-class “rumrunner” Bill McCoy. Before he was caught and thrown in jail, McCoy used to make regular trips between the US and the Bahamas in a boat that could carry over 4,000 cases of liquor and doubled as a floating liquor store. His alcohol was always 100% genuine and, as his fame spread, “the real McCoy” became a byword for unadulterated booze.

3 Responses to Gambling with Maotai